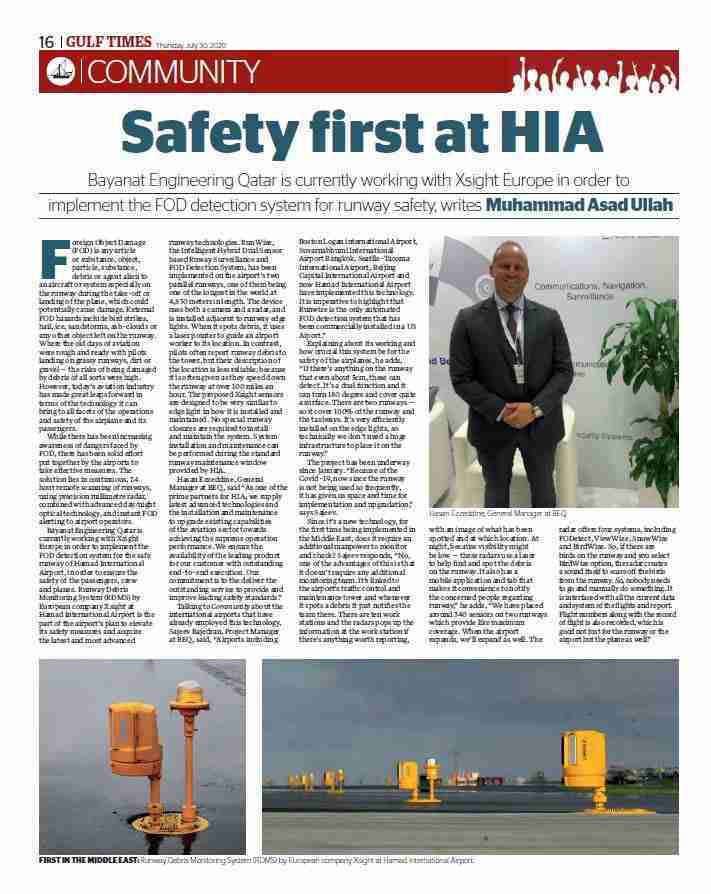 Muhammad Asad Ullah
Foreign Object Damage (FOD) is any article or substance, object, particle, substance, debris or agent alien to an aircraft or system especially on the runway during the take-off or landing of the plane, which could potentially cause damage. External FOD hazards include bird strikes, hail, ice, sandstorms, ash-clouds or any other object left on the runway. Where the old days of aviation were rough and ready with pilots landing on grassy runways, dirt or gravel — the risks of being damaged by debris of all sorts were high. However, today’s aviation industry has made great leaps forward in terms of the technology it can bring to all facets of the operations and safety of the airplane and its passengers.
While there has been increasing awareness of dangers faced by FOD, there has been solid effort put together by the airports to take effective measures. The solution lies in continuous, 24 hour remote scanning of runways, using precision millimetre radar, combined with advanced day/night optical technology, and instant FOD alerting to airport operators.
Bayanat Engineering Qatar is currently working with Xsight Europe in order to implement the FOD detection system for the safe runway of Hamad International Airport, in order to ensure the safety of the passengers, crew and planes. Runway Debris Monitoring System (RDMS) by European company Xsight at Hamad International Airport is the part of the airport’s plan to elevate its safety measures and acquire the latest and most advanced runway technologies. RunWize, the Intelligent Hybrid Dual Sensor based Ruway Surveillance and FOD Detection System, has been implemented on the airport’s two parallel runways, one of them being one of the longest in the world at 4,850 meters in length. The device uses both a camera and a radar, and is installed adjacent to runway edge lights. When it spots debris, it uses a laser pointer to guide an airport worker to its location. In contrast, pilots often report runway debris to the tower, but their description of the location is less reliable, because it is often given as they speed down the runway at over 100 miles an hour. The proposed Xsight sensors are designed to be very similar to edge light in how it is installed and maintained. No special runway closures are required to install and maintain the system. System installation and maintenance can be performed during the standard runway maintenance window provided by HIA.
Hasan Ezzeddine, General Manager at BEQ, said “As one of the prime partners for HIA, we supply latest advanced technologies and the installation and maintenance to upgrade existing capabilities of the aviation sector towards achieving the supreme operation performance. We ensure the availability of the leading product for our customer with outstanding end-to-end execution. Our commitment is to the deliver the outstanding service to provide and improve leading safety standards.”
Talking to Community about the international airports that have already employed this technology, Sajeev Rajedran, Project Manager at BEQ, said, “Airports including Boston Logan international Airport, Suvarnabhumi International Airport Bangkok, Seatlle-Tacoma International Airport, Beijing Capital International Airport and now Hamad International Airport have implemented this technology. It is imperative to highlight that Runwize is the only automated FOD detection system that has been commercially installed in a US Aiport.”
Explaining about its working and how crucial this system be for the safety of the airplanes, he adds, “If there’s anything on the runway that even about 5cm, these can detect. It’s a dual function and it can turn 180 degree and cover quite a surface. There are two runways — so it cover 100% of the runway and the taxiways. It’s very efficiently installed on the edge lights, so technically we don’t need a huge infrastructure to place it on the runway.”
The project has been underway since January. “Because of the Covid-19, now since the runway is not being used so frequently, it has given us space and time for implementation and upgradation,” says Sajeev.
Since it’s a new technology, for the first time being implemented in the Middle East, does it require an additional manpower to monitor and check? Sajeev responds, “No, one of the advantages of this is that it doesn’t require any additional monitoring team. It’s linked to the airport’s traffic control and maintenance tower and whenever it spots a debris it just notifies the team there. There are ten work stations and the radars pops up the information at the work station if there’s anything worth reporting, with an image of what has been spotted and at which location. At night, because visibility might be low — these radars use a laser to help find and spot the debris on the runway. It also has a mobile application and tab that makes it convenience to notify the concerned people regarding runway,” he adds, “We have placed around 340 sensors on two runways which provide like maximum coverage. When the airport expands, we’ll expand as well. The radar offers four systems, including FODetect, ViewWize, SnowWize and BirdWize. So, if there are birds on the runway and you select BirdWize option, the radar creates a sound itself to scare off the birds from the runway. So, nobody needs to go and manually do something. It is interfaced with all the current data and system of the flights and report. Flight numbers along with the record of flight is also recorded, which is good not just for the runway or the airport but the plane as well.”