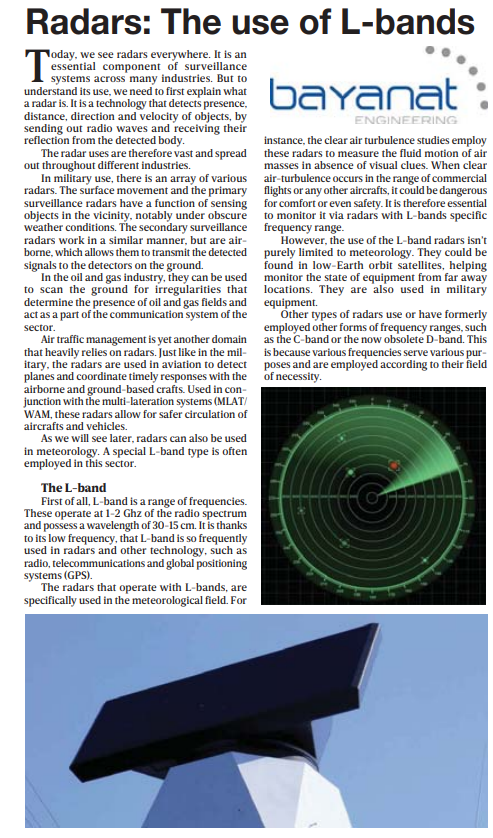 Radars: The use of L-bands

Today, we see radars everywhere. It is an essential component of surveillance systems across many industries. But to understand its use, we need to first explain what a radar is. It is a technology that detects presence, distance, direction and velocity of objects, by sending out radio waves and receiving their reflection from the detected body.

The radar uses are therefore vast and spread out throughout different industries.

In military use, there is an array of various radars. The surface movement and the primary surveillance radars have a function of sensing objects in the vicinity, notably under obscure weather conditions. The secondary surveillance radars work in a similar manner, but are airborne, which allows them to transmit the detected signals to the detectors on the ground.

In the oil and gas industry, they can be used to scan the ground for irregularities that determine the presence of oil and gas fields and act as a part of the communication system of the sector.

Air traffic management is yet another domain that heavily relies on radars. Just like in the military, the radars are used in aviation to detect planes and coordinate timely responses with the airborne and ground-based crafts. Used in conjunction with the multi-lateration systems (MLAT/WAM, these radars allow for safer circulation of aircrafts and vehicles.

As we will see later, radars can also be used in meteorology. A special L-band type is often employed in this sector.

The L-band
First of all, L-band is a range of frequencies. These operate at 1-2 Ghz of the radio spectrum and possess a wavelength of 30-15 cm. It is thanks to its low frequency, that L-band is so frequently used in radars and other technology, such as radio, telecommunications and global positioning systems (GPS).

The radars that operate with L-bands, are specifically used in the meteorological field. For instance, the clear air turbulence studies employ these radars to measure the fluid motion of air masses in absence of visual clues. When clear air-turbulence occurs in the range of commercial flights or any other aircrafts, it could be dangerous for comfort or even safety. It is therefore essential to monitor it via radars with L-bands specific frequency range.

However, the use of the L-band radars isn’t purely limited to meteorology. They could be found in low-Earth orbit satellites, helping monitor the state of equipment from far away locations. They are also used in military equipment.

Other types of radars use or have formerly employed other forms of frequency ranges, such as the C-band or the now obsolete D-band. This is because various frequencies serve various purposes and are employed according to their field of necessity.