History of aviation in Qatar 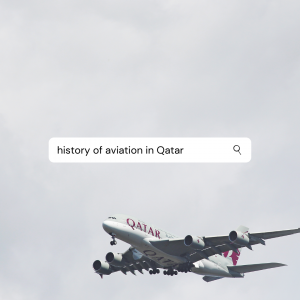 History of aviation in Qatar
Qatar is well-known for its aviation background and history. As the country sees increased economic and population growth, transport is becomingly increasingly important to Qatar. Home to one of the world’s busiest airports and the largest airlines, Qatar has become a country that is associated with aviation and aeronautics.
Qatar Airways
Qatar Airways is one of the world’s largest and well-known airlines. From their base in Doha, they link to over 150 destinations around the world. Serving in 6 continents, the airline has won the prestigious Airline of the Year award many times, including most recently in 2019.
Qatar Airways started out in 1994. At this time, the airline was only a small regional carrier, serving only a few short routes. One of the first commercial flights to leave Qatar was the A7-AEA Airbus A330-300. By 1995, the airline had a fleet of 2 Airbuses, that served routes to Abu Dhabi, Dubai, Bangkok and Tokyo. In 1997, flights to London were launched. By 2008, the fleet had grown from 4 aircraft to 50, and today the airline has a fleet of 212 aircraft.
In 2009, Qatar Airways was the first airline to conduct a commercial passenger flight using a mixture of kerosene and synthetic gas-to-liquids fuel. The Airbus A340-600 travelled from London Gatwick Airport to Doha using this fuel. In 2016, Qatar Airways was the first airline to land an Airbus A350 on American soil.
The longest and shortest flights
In 2016, Qatar Airways launched what was at the time the longest flight in the world. This flight from Doha to Auckland leaves daily and covers a distance of 14,536 kilometres. The flight journey is approximately 8 and a half hours.
This year also saw the shortest scheduled A380 flight from Qatar. This service flies from Dubai to Doha, covering a distance of just 379 kilometres and taking 1 hour and 20 minutes.
Hamad International Airport
There is only one commercial airport in Qatar, which is the Hamad International Airport. In 2014, Hamad International Airport replaced the former Doha International Airport to become Qatar’s principal airport. The Doha International Airport is now used as a military airport.
The Hamad International Airport was named as the 50th busiest airport in the world in 2016. That year it served over 37 million passengers. Located in the south of Doha, this airport was opened in April 2014 with a Qatar Airways ceremonial flight landing from Doha International Airport.
In 2019 Hamad International Airport saw an increase in annual passenger traffic by 12.4%, as over 38.8 million passengers used the airport. The airport has two parallel runaways which are located 2 kilometres away from each other. The first runway is thought to be the longest in Western Asia as well as one of the longest in the world.
Bayanat Engineering Qatar has a long history of working in the aviation industry in Qatar. Having completed engineering work at Hamad International Airport, our company is well trusted and our team are experts in areas such as air traffic management and navigation. For more information about our services, contact us today.