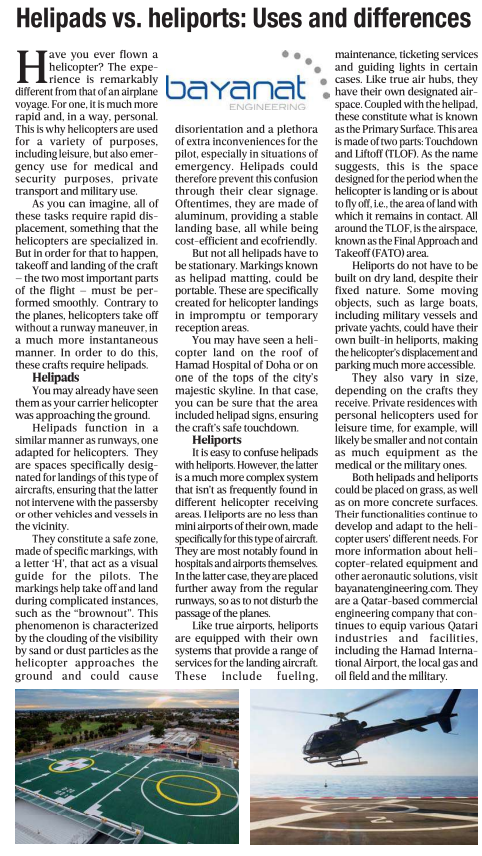 Helipads vs. heliports: Uses and differences

Have you ever flown a helicopter? The experience is remarkably different from that of an airplane voyage. For one, it is much more rapid and, in a way, personal. This is why helicopters are used for a variety of purposes, including leisure, but also emergency use for medical and security purposes, private transport and military use.

As you can imagine, all of these tasks require rapid displacement, something that the helicopters are specialized in. But in order for that to happen, takeoff and landing of the craft – the two most important parts of the flight – must be performed smoothly.  Contrary to the planes, helicopters take off without a runway maneuver, in a much more instantaneous manner. In order to do this, these crafts require helipads.

You may already have seen them as your carrier helicopter was approaching the ground.

Helipads function in a similar manner as runways, one adapted for helicopters.  They are spaces specifically designated for landings of this type of aircrafts, ensuring that the latter not intervene with the passersby or other vehicles and vessels in the vicinity.

They constitute a safe zone, made of specific markings, with a letter ‘H’, that act as a visual guide for the pilots. The markings help take off and land during complicated instances, such as the “brownout”. This phenomenon is characterized by the clouding of the visibility by sand or dust particles as the helicopter approaches the ground and could cause disorientation and a plethora of extra inconveniences for the pilot, especially in situations of emergency. Helipads could therefore prevent this confusion through their clear signage. Oftentimes, they are made of aluminum, providing a stable landing base, all while being cost-efficient and ecofriendly.

But not all helipads have to be stationary. Markings known as helipad matting, could be portable. These are specifically created for helicopter landings in impromptu or temporary reception areas.

You may have seen a helicopter land on the roof of Hamad Hospital of Doha or on one of the tops of the city’s majestic skyline. In that case, you can be sure that the area included helipad signs, ensuring the craft’s safe touchdown.

It is easy to confuse helipads with heliports. However, the latter is a much more complex system that isn’t as frequently found in different helicopter receiving areas. Heliports are no less than mini airports of their own, made specifically for this type of aircraft. They are most notably found in hospitals and airports themselves. In the latter case, they are placed further away from the regular runways, so as to not disturb the passage of the planes.

Like true airports, heliports are equipped with their own systems that provide a range of services for the landing aircraft. These include fueling, maintenance, ticketing services and guiding lights in certain cases. Like true air hubs, they have their own designated airspace. Coupled with the helipad, these constitute what is known as the Primary Surface. This area is made of two parts: Touchdown and Liftoff (TLOF). As the name suggests, this is the space designed for the period when the helicopter is landing or is about to fly off, i.e., the area of land with which it remains in contact. All around the TLOF, is the airspace, known as the Final Approach and Takeoff (FATO) area.

Heliports do not have to be built on dry land, despite their fixed nature. Some moving objects, such as large boats, including military vessels and private yachts, could have their own built-in heliports, making the helicopter’s displacement and parking much more accessible.

They also vary in size, depending on the crafts they receive. Private residences with personal helicopters used for leisure time, for example, will likely be smaller and not contain as much equipment as the medical or the military ones.

Both helipads and heliports could be placed on grass, as well as on more concrete surfaces. Their functionalities continue to develop and adapt to the helicopter users’ different needs. For more information about helicopter-related equipment and other aeronautic solutions, visit bayanatengineering.com. They are a Qatar-based commercial engineering company that continues to equip various Qatari industries and facilities, including the Hamad International Airport, the local gas and oil field and the military.