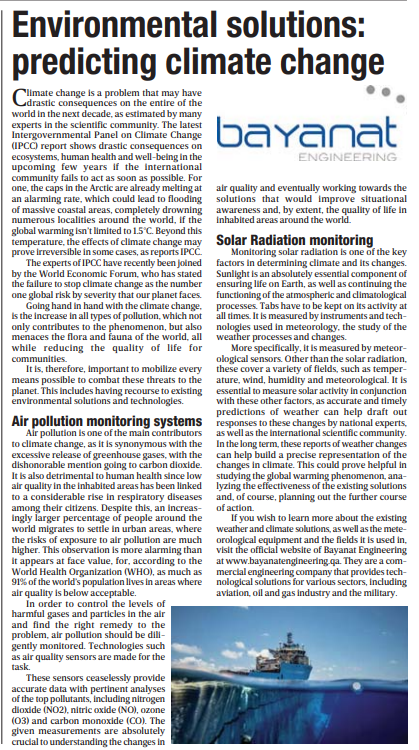 Climate change is a problem that may have drastic consequences on the entire of the world in the next decade, as estimated by many experts in the scientific community.

The latest Intergovernmental Panel on Climate Change (IPCC) report shows drastic consequences on ecosystems, human health and well-being in the upcoming few years if the international community fails to act as soon as possible.

For one, the caps in the Arctic are already melting at an alarming rate, which could lead to flooding of massive coastal areas, completely drowning numerous localities around the world, if the global warming isn’t limited to 1.5°C. Beyond this temperature, the effects of climate change may prove irreversible in some cases, as reports IPCC.

The experts of IPCC have recently been joined by the World Economic Forum, who has stated the failure to stop climate change as the number one global risk by severity that our planet faces.

Going hand in hand with the climate change, is the increase in all types of pollution, which not only contributes to the phenomenon, but also menaces the flora and fauna of the world, all while reducing the quality of life for communities.

It is, therefore, important to mobilize every means possible to combat these threats to the planet. This includes having recourse to existing environmental solutions and technologies.

Air pollution monitoring systems
Air pollution is one of the main contributors to climate change, as it is synonymous with the excessive release of greenhouse gases, with the dishonorable mention going to carbon dioxide. It is also detrimental to human health since low air quality in the inhabited areas has been linked to a considerable rise in respiratory diseases among their citizens.

Despite this, an increasingly larger percentage of people around the world migrates to settle in urban areas, where the risks of exposure to air pollution are much higher. This observation is more alarming than it appears at face value, for, according to the World Health Organization (WHO), as much as 91% of the world’s population lives in areas where air quality is below acceptable.

In order to control the levels of harmful gases and particles in the air and find the right remedy to the problem, air pollution should be diligently monitored. Technologies such as air quality sensors are made for the task.

These sensors ceaselessly provide accurate data with pertinent analyses of the top pollutants, including nitrogen dioxide (NO2), nitric oxide (NO), ozone (O3) and carbon monoxide (CO). The given measurements are absolutely crucial to understanding the changes in air quality and eventually working towards the solutions that would improve situational awareness and, by extent, the quality of life in inhabited areas around the world.

Solar Radiation monitoring
Monitoring solar radiation is one of the key factors in determining climate and its changes. Sunlight is an absolutely essential component of ensuring life on Earth, as well as continuing the functioning of the atmospheric and climatological processes. Tabs have to be kept on its activity at all times. It is measured by instruments and technologies used in meteorology, the study of the weather processes and changes.

More specifically, it is measured by meteorological sensors. Other than the solar radiation, these cover a variety of fields, such as temperature, wind, humidity and meteorological. It is essential to measure solar activity in conjunction with these other factors, as accurate and timely predictions of weather can help draft out responses to these changes by national experts, as well as the international scientific community. In the long term, these reports of weather changes can help build a precise representation of the changes in climate. This could prove helpful in studying the global warming phenomenon, analyzing the effectiveness of the existing solutions and, of course, planning out the further course of action.

If you wish to learn more about the existing weather and climate solutions, as well as the meteorological equipment and the fields it is used in, visit the official website of Bayanat Engineering at www.bayanatengineering.qa. They are a commercial engineering company that provides technological solutions for various sectors, including aviation, oil and gas industry and the military.