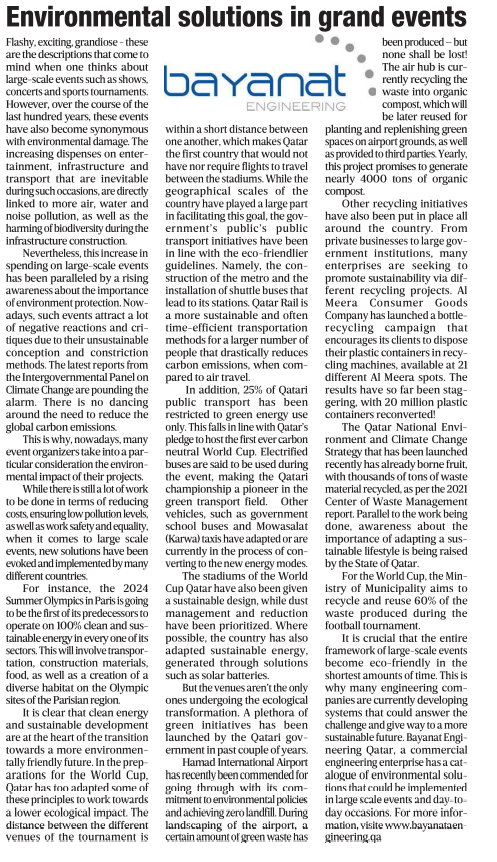 Flashy, exciting, grandiose – these are the descriptions that come to mind when one thinks about large-scale events such as shows, concerts and sports tournaments. However, over the course of the last hundred years, these events have also become synonymous with environmental damage. The increasing dispenses on entertainment, infrastructure and transport that are inevitable during such occasions, are directly linked to more air, water and noise pollution, as well as the harming of biodiversity during the infrastructure construction.

Nevertheless, this increase in spending on large-scale events has been paralleled by a rising awareness about the importance of environment protection. Nowadays, such events attract a lot of negative reactions and critiques due to their unsustainable conception and constriction methods. The latest reports from the Intergovernmental Panel on Climate Change are pounding the alarm. There is no dancing around the need to reduce the global carbon emissions.
This is why, nowadays, many event organizers take into a particular consideration the environmental impact of their projects.

While there is still a lot of work to be done in terms of reducing costs, ensuring low pollution levels, as well as work safety and equality, when it comes to large scale events, new solutions have been evoked and implemented by many different countries.

For instance, the 2024 Summer Olympics in Paris is going to be the first of its predecessors to operate on 100% clean and sustainable energy in every one of its sectors. This will involve transportation, construction materials, food, as well as a creation of a diverse habitat on the Olympic sites of the Parisian region.

It is clear that clean energy and sustainable development are at the heart of the transition towards a more environmentally friendly future. In the preparations for the World Cup, Qatar has too adapted some of these principles to work towards a lower ecological impact. The distance between the different venues of the tournament is within a short distance between one another, which makes Qatar the first country that would not have nor require flights to travel between the stadiums. While the geographical scales of the country have played a large part in facilitating this goal, the government’s public’s public transport initiatives have been in line with the eco-friendlier guidelines. Namely, the construction of the metro and the installation of shuttle buses that lead to its stations. Qatar Rail is a more sustainable and often time-efficient transportation methods for a larger number of people that drastically reduces carbon emissions, when compared to air travel.

In addition, 25% of Qatari public transport has been restricted to green energy use only. This falls in line with Qatar’s pledge to host the first ever carbon neutral World Cup. Electrified buses are said to be used during the event, making the Qatari championship a pioneer in the green transport field.

Other vehicles, such as government school buses and Mowasalat (Karwa) taxis have adapted or are currently in the process of converting to the new energy modes.

The stadiums of the World Cup Qatar have also been given a sustainable design, while dust management and reduction have been prioritized. Where possible, the country has also adapted sustainable energy, generated through solutions such as solar batteries.

But the venues aren’t the only ones undergoing the ecological transformation. A plethora of green initiatives has been launched by the Qatari government in past couple of years.

Hamad International Airport has recently been commended for going through with its commitment to environmental policies and achieving zero landfill.

During landscaping of the airport, a certain amount of green waste has been produced – but none shall be lost! The air hub is currently recycling the waste into organic compost, which will be later reused for planting and replenishing green spaces on airport grounds, as well as provided to third parties. Yearly, this project promises to generate nearly 4000 tons of organic compost.

Other recycling initiatives have also been put in place all around the country. From private businesses to large government institutions, many enterprises are seeking to promote sustainability via different recycling projects. Al Meera Consumer Goods Company has launched a bottle-recycling campaign that encourages its clients to dispose their plastic containers in recycling machines, available at 21 different Al Meera spots. The results have so far been staggering, with 20 million plastic containers reconverted!

The Qatar National Environment and Climate Change Strategy that has been launched recently has already borne fruit, with thousands of tons of waste material recycled, as per the 2021 Center of Waste Management report. Parallel to the work being done, awareness about the importance of adapting a sustainable lifestyle is being raised by the State of Qatar.

For the World Cup, the Ministry of Municipality aims to recycle and reuse 60% of the waste produced during the football tournament.

It is crucial that the entire framework of large-scale events become eco-friendly in the shortest amounts of time. This is why many engineering companies are currently developing systems that could answer the challenge and give way to a more sustainable future. Bayanat Engineering Qatar, a commercial engineering enterprise has a catalogue of environmental solutions that could be implemented in large scale events and day-to-day occasions. For more information, visit www.bayanataengineering.qa