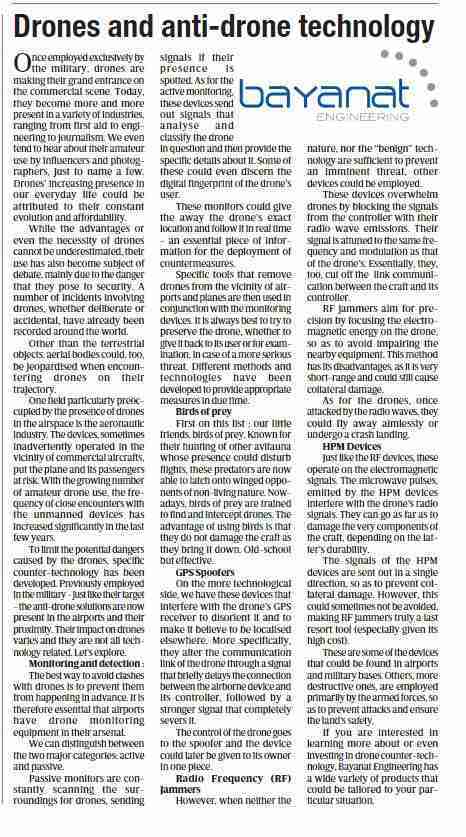 Once employed exclusively by the military, drones are making their grand entrance on the commercial scene.

Today, they become more and more present in a variety of industries, ranging from first aid to engineering to journalism. We even tend to hear about their amateur use by influencers and photographers, just to name a few.

Drones’ increasing presence in our everyday life could be attributed to their constant evolution and affordability.

While the advantages or even the necessity of drones cannot be underestimated, their use has also become subject of debate, mainly due to the danger that they pose to security. A number of incidents involving drones, whether deliberate or accidental, have already been recorded around the world.

Other than the terrestrial objects, aerial bodies could, too, be jeopardised when encountering drones on their trajectory.

One field particularly preoccupied by the presence of drones in the airspace is the aeronautic industry. The devices, sometimes inadvertently operated in the vicinity of commercial aircrafts, put the plane and its passengers at risk.

With the growing number of amateur drone use, the frequency of close encounters with the unmanned devices has increased significantly in the last few years.

To limit the potential dangers caused by the drones, specific counter-technology has been developed. Previously employed in the military – just like their target – the anti-drone solutions are now present in the airports and their proximity. Their impact on drones varies and they are not all technology related. Let’s explore.

The best way to avoid clashes with drones is to prevent them from happening in advance. It is therefore essential that airports have drone monitoring equipment in their arsenal.

We can distinguish between the two major categories: active and passive.

Passive monitors are constantly scanning the surroundings for drones, sending signals if their presence is spotted.

As for the active monitoring, these devices send out signals that analyse and classify the drone in question and then provide the specific details about it. Some of these could even discern the digital fingerprint of the drone’s user.

These monitors could give the away the drone’s exact location and follow it in real time – an essential piece of information for the deployment of countermeasures.

Specific tools that remove drones from the vicinity of airports and planes are then used in conjunction with the monitoring devices. It is always best to try to preserve the drone, whether to give it back to its user or for examination, in case of a more serious threat. Different methods and technologies have been developed to provide appropriate measures in due time.

First on this list : our little friends, birds of prey. Known for their hunting of other avifauna whose presence could disturb flights, these predators are now able to latch onto winged opponents of non-living nature. Nowadays, birds of prey are trained to find and intercept drones. The advantage of using birds is that they do not damage the craft as they bring it down. Old-school but effective.

On the more technological side, we have these devices that interfere with the drone’s GPS receiver to disorient it and to make it believe to be localised elsewhere. More specifically, they alter the communication link of the drone through a signal that briefly delays the connection between the airborne device and its controller, followed by a stronger signal that completely severs it.

The control of the drone goes to the spoofer and the device could later be given to its owner in one piece.

However, when neither the nature, nor the “benign” technology are sufficient to prevent an imminent threat, other devices could be employed.

These devices overwhelm drones by blocking the signals from the controller with their radio wave emissions. Their signal is attuned to the same frequency and modulation as that of the drone’s. Essentially, they, too, cut off the  link communication between the craft and its controller.

RF jammers aim for precision by focusing the electromagnetic energy on the drone, so as to avoid impairing the nearby equipment. This method has its disadvantages, as it is very short-range and could still cause collateral damage.

As for the drones, once attacked by the radio waves, they could fly away aimlessly or undergo a crash landing.
HPM Devices

Just like the RF devices, these operate on the electromagnetic signals. The microwave pulses, emitted by the HPM devices interfere with the drone’s radio signals. They can go as far as to damage the very components of the craft, depending on the latter’s durability.

The signals of the HPM devices are sent out in a single direction, so as to prevent collateral damage. However, this could sometimes not be avoided, making RF jammers truly a last resort tool (especially given its high cost).

These are some of the devices that could be found in airports and military bases. Others, more destructive ones, are employed primarily by the armed forces, so as to prevent attacks and ensure the land’s safety.

If you are interested in learning more about or even investing in drone counter-technology, Bayanat Engineering has a wide variety of products that could be tailored to your particular situation.