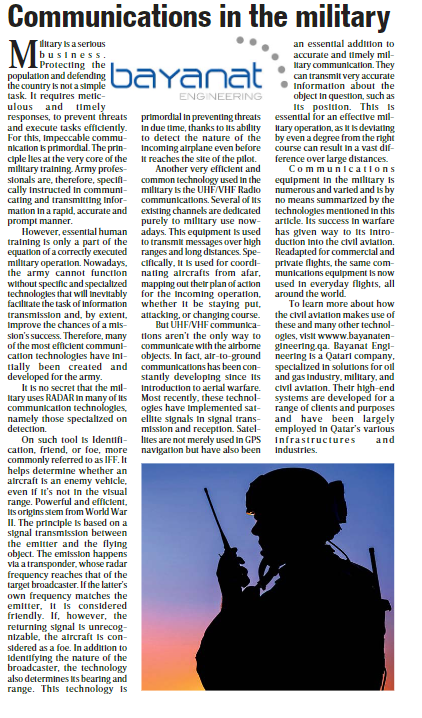 Communications in the military

Military is a serious business. Protecting the population and defending the country is not a simple task. It requires meticulous and timely responses, to prevent threats and execute tasks efficiently. For this, impeccable communication is primordial. The principle lies at the very core of the military training. Army professionals are, therefore, specifically instructed in communicating and transmitting information in a rapid, accurate and prompt manner.

However, essential human training is only a part of the equation of a correctly executed military operation. Nowadays, the army cannot function without specific and specialized technologies that will inevitably facilitate the task of information transmission and, by extent, improve the chances of a mission’s success. Therefore, many of the most efficient communication technologies have initially been created and developed for the army.

It is no secret that the military uses RADAR in many of its communication technologies, namely those specialized on detection.

On such tool is Identification, friend, or foe, more commonly referred to as IFF. It helps determine whether an aircraft is an enemy vehicle, even if it’s not in the visual range. Powerful and efficient, its origins stem from World War II. The principle is based on a signal transmission between the emitter and the flying object. The emission happens via a transponder, whose radar frequency reaches that of the target broadcaster. If the latter’s own frequency matches the emitter, it is considered friendly. If, however, the returning signal is unrecognizable, the aircraft is considered as a foe. In addition to identifying the nature of the broadcaster, the technology also determines its bearing and range. This technology is primordial in preventing threats in due time, thanks to its ability to detect the nature of the incoming airplane even before it reaches the site of the pilot.

Another very efficient and common technology used in the military is the UHF/VHF Radio communications. Several of its existing channels are dedicated purely to military use nowadays. This equipment is used to transmit messages over high ranges and long distances. Specifically, it is used for coordinating aircrafts from afar, mapping out their plan of action for the incoming operation, whether it be staying put, attacking, or changing course.

But UHF/VHF communications aren’t the only way to communicate with the airborne objects. In fact, air-to-ground communications has been constantly developing since its introduction to aerial warfare. Most recently, these technologies have implemented satellite signals in signal transmission and reception. Satellites are not merely used in GPS navigation but have also been an essential addition to accurate and timely military communication. They can transmit very accurate information about the object in question, such as its position. This is essential for an effective military operation, as it is deviating by even a degree from the right course can result in a vast difference over large distances.

Communications equipment in the military is numerous and varied and is by no means summarized by the technologies mentioned in this article. Its success in warfare has given way to its introduction into the civil aviation. Readapted for commercial and private flights, the same communications equipment is now used in everyday flights, all around the world.

To learn more about how the civil aviation makes use of these and many other technologies, visit www.bayanatengineering.qa. Bayanat Engineering is a Qatari company, specialized in solutions for oil and gas industry, military, and civil aviation. Their high-end systems are developed for a range of clients and purposes and have been largely employed in Qatar’s various infrastructures and industries.