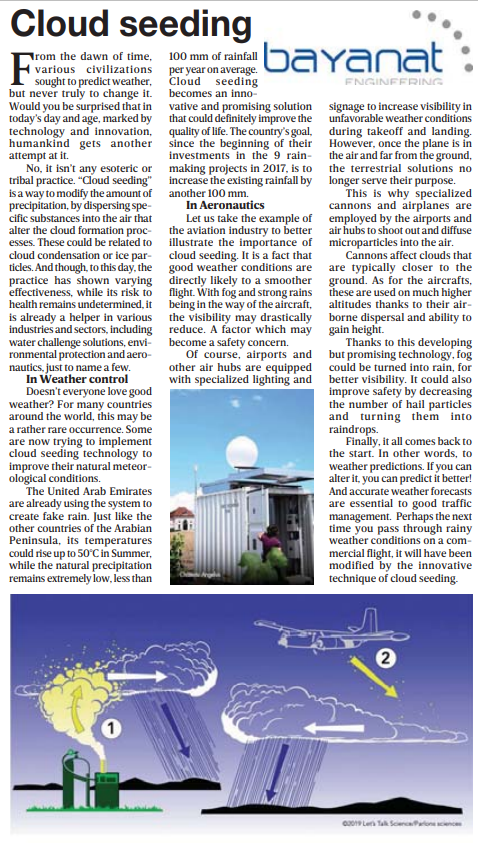 From the dawn of time, various civilizations sought to predict weather, but never truly to change it. Would you be surprised that in today’s day and age, marked by technology and innovation, humankind gets another attempt at it.
No, it isn’t any esoteric or tribal practice. “Cloud seeding” is a way to modify the amount of precipitation, by dispersing specific substances into the air that alter the cloud formation processes. These could be related to cloud condensation or ice particles. And though, to this day, the practice has shown varying effectiveness, while its risk to health remains undetermined, it is already a helper in various industries and sectors, including water challenge solutions, environmental protection and aeronautics, just to name a few.

Doesn’t everyone love good weather? For many countries around the world, this may be a rather rare occurrence. Some are now trying to implement cloud seeding technology to improve their natural meteorological conditions.

The United Arab Emirates are already using the system to create fake rain. Just like the other countries of the Arabian Peninsula, its temperatures could rise up to 50°C in Summer, while the natural precipitation remains extremely low, less than 100 mm of rainfall per year on average. Cloud seeding becomes an innovative and promising solution that could definitely improve the quality of life. The country’s goal, since the beginning of their investments in the 9 rain-making projects in 2017, is to increase the existing rainfall by another 100 mm.

Let us take the example of the aviation industry to better illustrate the importance of cloud seeding. It is a fact that good weather conditions are directly likely to a smoother flight. With fog and strong rains being in the way of the aircraft, the visibility may drastically reduce. A factor which may become a safety concern.

Of course, airports and other air hubs are equipped with specialized lighting and signage to increase visibility in unfavorable weather conditions during takeoff and landing. However, once the plane is in the air and far from the ground, the terrestrial solutions no longer serve their purpose.

This is why specialized cannons and airplanes are employed by the airports and air hubs to shoot out and diffuse microparticles into the air.

Cannons affect clouds that are typically closer to the ground. As for the aircrafts, these are used on much higher altitudes thanks to their airborne dispersal and ability to gain height.

Thanks to this developing but promising technology, fog could be turned into rain, for better visibility. It could also improve safety by decreasing the number of hail particles and turning them into raindrops.

Finally, it all comes back to the start. In other words, to weather predictions. If you can alter it, you can predict it better! And accurate weather forecasts are essential to good traffic management. Perhaps the next time you pass through rainy weather conditions on a commercial flight, it will have been modified by the innovative technique of cloud seeding.