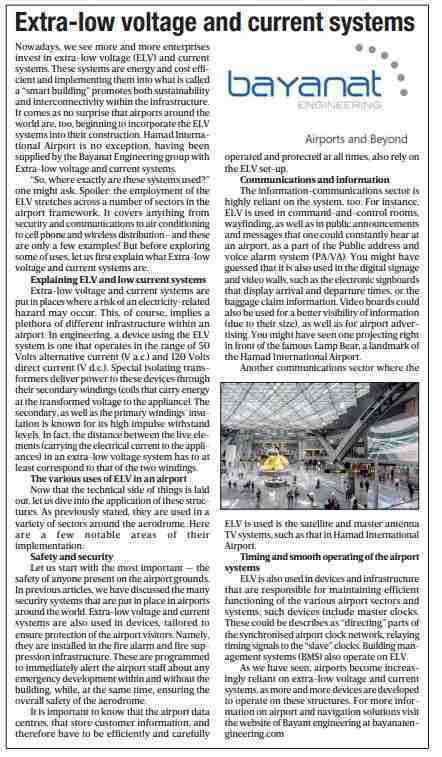 Nowadays, we see more and more enterprises invest in extra-low voltage (ELV) and current systems. These systems are energy and cost efficient and implementing them into what is called a “smart building” promotes both sustainability and interconnectivity within the infrastructure. It comes as no surprise that airports around the world are, too, beginning to incorporate the ELV systems into their construction. Hamad International Airport is no exception, having been supplied by the Bayanat Engineering group with Extra-low voltage and current systems.

“So, where exactly are these systems used?” one might ask. Spoiler: the employment of the ELV stretches across a number of sectors in the airport framework. It covers anything from security and communications to air conditioning to cell phone and wireless distribution – and these are only a few examples! But before exploring some of uses, let us first explain what Extra-low voltage and current systems are.

Explaining ELV and low current systems
Extra-low voltage and current systems are put in places where a risk of an electricity-related hazard may occur. This, of course, implies a plethora of different infrastructure within an airport. In engineering, a device using the ELV system is one that operates in the range of 50 Volts alternative current (V a.c.) and 120 Volts direct current (V d.c.). Special isolating transformers deliver power to these devices through their secondary windings (coils that carry energy at the transformed voltage to the appliance).

The secondary, as well as the primary windings’ insulation is known for its high impulse withstand levels. In fact, the distance between the live elements (carrying the electrical current to the appliances) in an extra-low voltage system has to at least correspond to that of the two windings.

The various uses of ELV in an airport

Now that the technical side of things is laid out, let us dive into the application of these structures. As previously stated, they are used in a variety of sectors around the aerodrome. Here are a few notable areas of their implementation:

Let us start with the most important — the safety of anyone present on the airport grounds. In previous articles, we have discussed the many security systems that are put in place in airports around the world.

Extra-low voltage and current systems are also used in devices, tailored to ensure protection of the airport visitors. Namely, they are installed in the fire alarm and fire suppression infrastructure. These are programmed to immediately alert the airport staff about any emergency development within and without the building, while, at the same time, ensuring the overall safety of the aerodrome.

It is important to know that the airport data centres, that store customer information, and therefore have to be efficiently and carefully operated and protected at all times, also rely on the ELV set-up.

The information-communications sector is highly reliant on the system, too. For instance, ELV is used in command-and-control rooms, wayfinding, as well as in public announcements and messages that one could constantly hear at an airport, as a part of the Public address and voice alarm system (PA/VA). You might have guessed that it is also used in the digital signage and video walls, such as the electronic signboards that display arrival and departure times, or the baggage claim information. Video boards could also be used for a better visibility of information (due to their size), as well as for airport advertising. You might have seen one projecting right in front of the famous Lamp Bear, a landmark of the Hamad International Airport.

Another communications sector where the ELV is used is the satellite and master antenna TV systems, such as that in Hamad International Airport.

Timing and smooth operating of the airport systems

ELV is also used in devices and infrastructure that are responsible for maintaining efficient functioning of the various airport sectors and systems; such devices include master clocks. These could be describes as “directing” parts of the synchronised airport clock network, relaying timing signals to the “slave” clocks. Building management systems (BMS) also operate on ELV.

As we have seen, airports become increasingly reliant on extra-low voltage and current systems, as more and more devices are developed to operate on these structures.