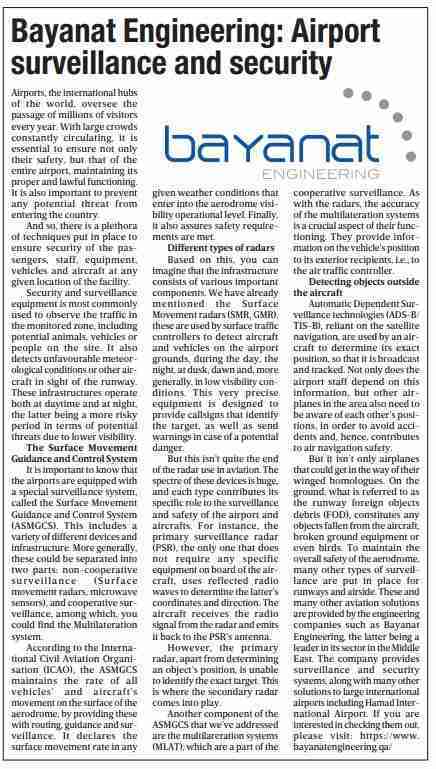 Airports, the international hubs of the world, oversee the passage of millions of visitors every year. With large crowds constantly circulating, it is essential to ensure not only their safety, but that of the entire airport, maintaining its proper and lawful functioning. It is also important to prevent any potential threat from entering the country.

And so, there is a plethora of techniques put in place to ensure security of the passengers, staff, equipment, vehicles and aircraft at any given location of the facility.

Security and surveillance equipment is most commonly used to observe the traffic in the monitored zone, including potential animals, vehicles or people on the site. It also detects unfavourable meteorological conditions or other aircraft in sight of the runway. These infrastructures operate both at daytime and at night, the latter being a more risky period in terms of potential threats due to lower visibility.

It is important to know that the airports are equipped with a special surveillance system, called the Surface Movement Guidance and Control System (ASMGCS). This includes a variety of different devices and infrastructure.

More generally, these could be separated into two parts: non-cooperative surveillance (Surface movement radars, microwave sensors), and cooperative surveillance, among which, you could find the Multilateration system.
According to the International Civil Aviation Organisation (ICAO), the ASMGCS maintains the rate of all vehicles’ and aircraft’s movement on the surface of the aerodrome, by providing these with routing, guidance and surveillance. It declares the surface movement rate in any given weather conditions that enter into the aerodrome visibility operational level. Finally, it also assures safety requirements are met.

Based on this, you can imagine that the infrastructure consists of various important components. We have already mentioned the Surface Movement radars (SMR, GMR), these are used by surface traffic controllers to detect aircraft and vehicles on the airport grounds, during the day, the night, at dusk, dawn and, more generally, in low visibility conditions. This very precise equipment is designed to provide callsigns that identify the target, as well as send warnings in case of a potential danger.

But this isn’t quite the end of the radar use in aviation. The spectre of these devices is huge, and each type contributes its specific role to the surveillance and safety of the airport and aircrafts. For instance, the primary surveillance radar (PSR), the only one that does not require any specific equipment on board of the aircraft, uses reflected radio waves to determine the latter’s coordinates and direction. The aircraft receives the radio signal from the radar and emits it back to the PSR’s antenna.

However, the primary radar, apart from determining an object’s position, is unable to identify the exact target. This is where the secondary radar comes into play.

Another component of the ASMGCS that we’ve addressed are the multilareration systems (MLAT), which are a part of the cooperative surveillance. As with the radars, the accuracy of the multilateration systems is a crucial aspect of their functioning. They provide information on the vehicle’s position to its exterior recipients, i.e., to the air traffic controller.

Detecting objects outside the aircraft

Automatic Dependent Surveillance technologies (ADS-B/TIS-B), reliant on the satellite navigation, are used by an aircraft to determine its exact position, so that it is broadcast and tracked. Not only does the airport staff depend on this information, but other airplanes in the area also need to be aware of each other’s positions, in order to avoid accidents and, hence, contributes to air navigation safety.

But it isn’t only airplanes that could get in the way of their winged homologues. On the ground, what is referred to as the runway foreign objects debris (FOD), constitutes any objects fallen from the aircraft, broken ground equipment or even birds. To maintain the overall safety of the aerodrome, many other types of surveillance are put in place for runways and airside. These and many other aviation solutions are provided by the engineering companies such as Bayanat Engineering, the latter being a leader in its sector in the Middle East. The company provides surveillance and security systems, along with many other solutions to large international airports including Hamad International Airport. If you are interested in checking them out, please visit: https://www.bayanatengineering.qa/