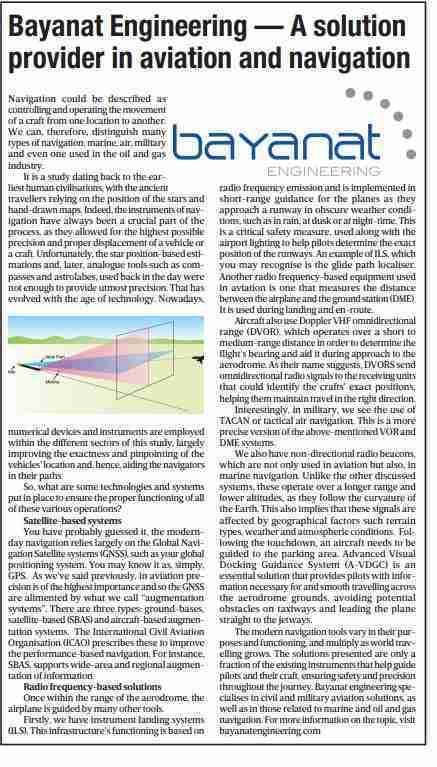 Bayanat Engineering — A solution provider in aviation and navigation

Bayanat Engineering — A solution provider in aviation and navigation

Navigation could be described as controlling and operating the movement of a craft from one location to another. We can, therefore, distinguish many types of navigation: marine, air, military and even one used in the oil and gas industry.

It is a study dating back to the earliest human civilisations, with the ancient travellers relying on the position of the stars and hand-drawn maps. Indeed, the instruments of navigation have always been a crucial part of the process, as they allowed for the highest possible precision and proper displacement of a vehicle or a craft. Unfortunately, the star position-based estimations and, later, analogue tools such as compasses and astrolabes, used back in the day were not enough to provide utmost precision. That has evolved with the age of technology. Nowadays, numerical devices and instruments are employed within the different sectors of this study, largely improving the exactness and pinpointing of the vehicles’ location and, hence, aiding the navigators in their paths.

So, what are some technologies and systems put in place to ensure the proper functioning of all of these various operations?

You have probably guessed it, the modern-day navigation relies largely on the Global Navigation Satellite systems (GNSS), such as your global positioning system. You may know it as, simply, GPS.  As we’ve said previously, in aviation precision is of the highest importance and so the GNSS are alimented by what we call “augmentation systems”. There are three types: ground-bases, satellite-based (SBAS) and aircraft-based augmentation systems.  The International Civil Aviation Organisation (ICAO) prescribes these to improve the performance-based navigation. For instance, SBAS, supports wide-area and regional augmentation of information.

Once within the range of the aerodrome, the airplane is guided by many other tools.

Firstly, we have instrument landing systems (ILS). This infrastructure’s functioning is based on radio frequency emission and is implemented in short-range guidance for the planes as they approach a runway in obscure weather conditions, such as in rain, at dusk or at night-time. This is a critical safety measure, used along with the airport lighting to help pilots determine the exact position of the runways. An example of ILS, which you may recognise is the glide path localiser. Another radio frequency-based equipment used in aviation is one that measures the distance between the airplane and the ground station (DME). It is used during landing and en-route.

Aircraft also use Doppler VHF omnidirectional range (DVOR), which operates over a short to medium-range distance in order to determine the flight’s bearing and aid it during approach to the aerodrome. As their name suggests, DVORS send omnidirectional radio signals to the receiving units that could identify the crafts’ exact positions, helping them maintain travel in the right direction.

Interestingly, in military, we see the use of TACAN or tactical air navigation. This is a more precise version of the above-mentioned VOR and DME systems.

We also have non-directional radio beacons, which are not only used in aviation but also, in marine navigation. Unlike the other discussed systems, these operate over a longer range and lower altitudes, as they follow the curvature of the Earth. This also implies that these signals are affected by geographical factors such terrain types, weather and atmospheric conditions.  Following the touchdown, an aircraft needs to be guided to the parking area. Advanced Visual Docking Guidance System (A-VDGC) is an essential solution that provides pilots with information necessary for and smooth travelling across the aerodrome grounds, avoiding potential obstacles on taxiways and leading the plane straight to the jetways.

The modern navigation tools vary in their purposes and functioning, and multiply as world travelling grows. The solutions presented are only a fraction of the existing instruments that help guide pilots and their craft, ensuring safety and precision throughout the journey. Bayanat engineering specialises in civil and military aviation solutions, as well as in those related to marine and oil and gas navigation.