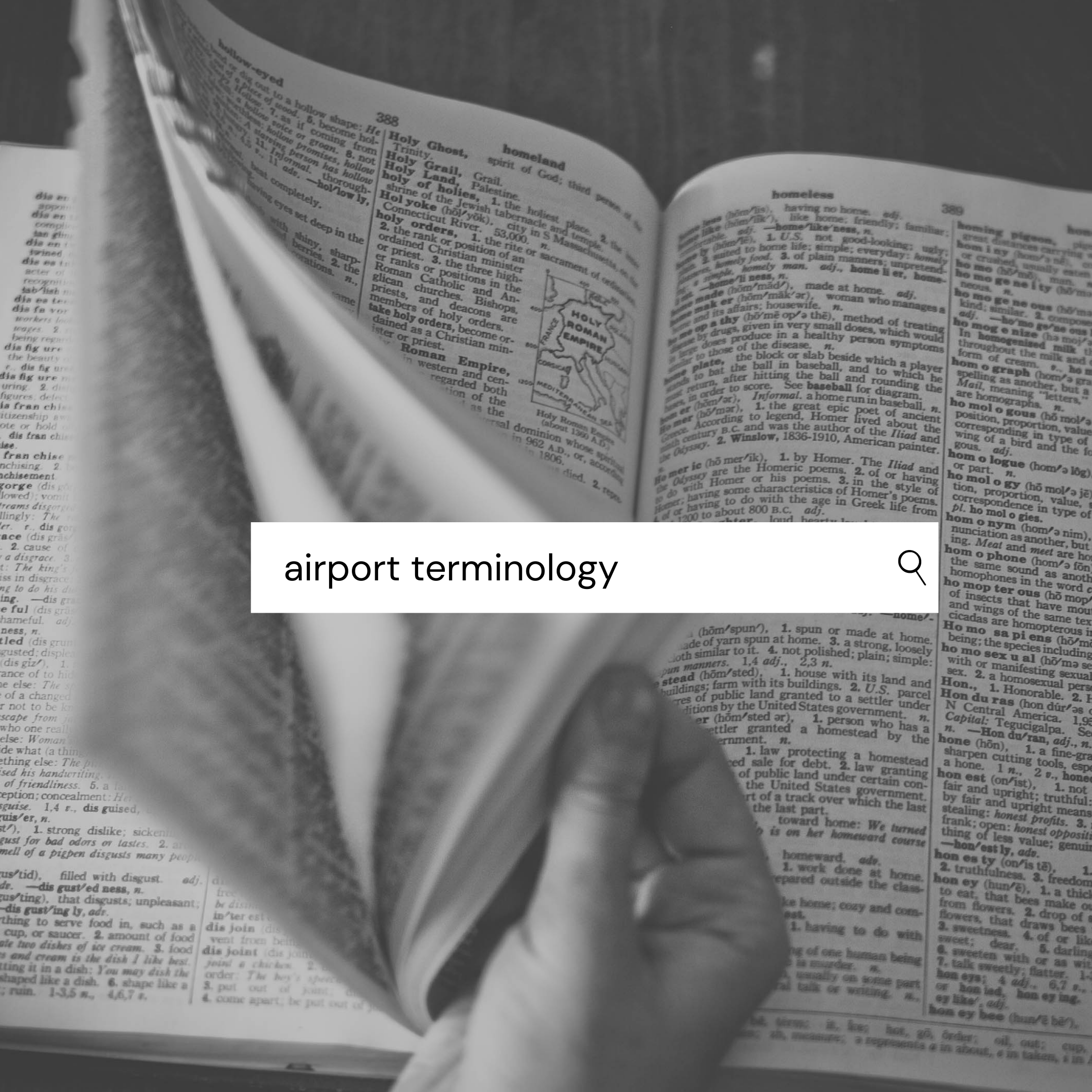 A Guide to Essential Airport Terminology and its Origins

Air travel has been around for decades, and over time the aviation industry has built up a wealth of airport terms that are used to make communication between airport staff quick and simple. From the term ‘airport’ itself to more technical acronyms, there is a wealth of unique terminology used in every airport.

It’s important for both passengers and aviation employees to understand these terms. Let’s first take a look at the word ‘airport’ itself, and where this word comes from, before going over some of the most essential airport terminologies that are used in airports around the world today.

What is the origin of the word ‘airport’?

The word ‘airport’ comes from the words ‘aerodrome’ and ‘port’. An aerodrome is any location from which aircraft take flight, which means that all airports are aerodromes, but not all aerodromes are airports. To achieve ‘airport’ status, in some regions it’s necessary to have been certified as an airport by the local jurisdiction. More generally, an airport is bigger, with more terminals, than a simple aerodrome. The ‘port’ part of the word no doubt originates from maritime ports, which describe any location where ships and boats arrive and leave from.

College Park Airport, in Maryland, US, is generally accepted to be the world’s oldest airport, operating since 1909, while Hamburg Airport, opened in 1911, is the world’s oldest commercial airport still in operation. Since the 1960s, the number of airports around the world has multiplied quickly, with air travel becoming more and more accessible with each passing decade to the average customer.

ATC: ATC, or Air Traffic Control, refers to the team of controllers who keep an eye on an airplane’s flight path and command every aspect of a flight.

Customs: This is the building where passengers and visitors must go through the process of entering a country. The customs officer checks passports, visas, travel documents, customs declarations, and health certificates before allowing you to enter the country.

Ground stop: When a ‘ground stop’ is enforced, this means that no aircraft is permitted to take off or land at the airport. This could be due to bad weather such as storms, or even terrorist threats.

Slot: This is the scheduled time for take-off and arrival for a particular flight.

Taxiway: This is a specialized path for aircraft taxiing that runs parallel to one or more runways. Taxi routes are usually marked with lights (red and green) on both sides of the runway so that pilots can recognize them as they approach their turn-off point from either direction.

Terminal: This is the building from which passengers either enter or leave an airport. A terminal contains gates for the aircraft as well as luggage carousels and other facilities. The word ‘terminal’ is used because this is where a passenger’s flight journey terminates.

At Bayanat Engineering, we offer bespoke tech solutions for airports around the world. From communication radios to passenger counting systems, we can install cutting-edge technology in your airport to improve the customer experience, streamline passenger journeys, and boost profitability. Find out more about our contemporary airport solutions and contact us today.